Organic Sea Harvest (OSH) has today (Wednesday 28 April) appealed against a refusal of planning permission for a fish farm in Skye.

The salmon start-up company was denied permission for a site in Balmaqueen during a Highland Council North Planning Committee meeting on 26 January 2021.  Despite the plans being recommended for approval, the application was denied by eight votes to six.

The main reason for refusal was cited as a negative impact on localised views for a limited portion of north-east Skye. 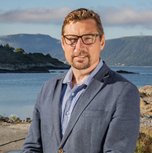 "It is hoped that our appeal will be successful as we continue our mission of becoming the leading organic salmon producer in the world and bringing huge economic benefits to the local area.  We are mindful that we must work in harmony with the environment, fish and community to achieve our visions.”

OSH believes the limited visual effect would be greatly outweighed by economic benefits the farm would bring to the community, including the direct creation of nine full-time jobs.  The Balmaqueen site would release £4 million, allocated for salaries, equipment and stock, as well as allowing Skye to expand its aquaculture industry in a sustainable manner.  It has recently been documented that the refusal decision has caused significant reduced economic activities elsewhere in Scotland.

OSH chose Balmaqueen due to its ideal sustainability characteristics.  OSH aims to become the leading organic salmon producer in the world and selecting the best possible sites to rear healthy salmon is part of that ongoing vision.  The Balmaqueen site has an excellent water exchange rate, thanks to strong currents and tides, resulting in regularly-flowing oxygen and lessening the risk of sea lice.  The carefully-selected, exposed location would create an ideal environment to nurture the fish as they develop from smolts to marketable salmon.

OSH ensure their fish have room to grow by carefully maintaining the stocking density in their sea cages.  Each cage has a ratio of 99% sea water with only 1% fish, giving the salmon plenty of space and reducing the environmental impact.

OSH CEO, Ove Thu, stated: “We are committed to supporting the community in north-east Skye and investing in the fragile local economy.  We believe aquaculture will help to support the diversification of Skye’s economy, which relies strongly on tourism, and has struggled greatly during the Covid-19 pandemic.

“There is absolutely no evidence to suggest a salmon farm would deter visitors.  We believe tourism and aquaculture can work hand-in-hand to bolster the local economy.  It presents a chance to showcase Scotland’s economic diversity and traditional reliance on the sea.  Skye has already witnessed a growth in aquaculture, with no evidence that this has impacted visitor numbers.  As producers of organic salmon, we want to show everyone that Skye is a world-class destination for top-quality, locally-sourced food.

“It is hoped that our appeal will be successful as we continue our mission of becoming the leading organic salmon producer in the world and bringing huge economic benefits to the local area.  We are mindful that we must work in harmony with the environment, fish and community to achieve our visions.”

A decision regarding the appeal will be made by a reporter appointed by the Scottish Government.  It is not known when a decision will be reached.

1) OSH is the only salmon farming company in Scotland to focus solely on producing the finest organic salmon.

OSH was officially incorporated in August 2015.  The first harvest for the market is expected in June 2021, with the fish available in the market around 36-48 hours after harvest.

2) OSH currently operates two sites on Skye, located at Invertote and Culnacnoc, with both sea sites officially certified as organic by the UK Soil Association.

5) A report, the Estimation of the Wider Economic Impacts of the Aquaculture Sector in Scotland, published in September 2020 and undertaken by Biggar Economics on behalf of Marine Scotland and the Scottish Government, stated that in 2018, the aquaculture sector supported 11,700 jobs in the Scottish economy.  Therefore, it can be calculated that each job in Scottish aquaculture will indirectly create four other Scottish jobs.  https://www.gov.scot/news/wider-economic-impacts-of-aquaculture/.