Prince Charles and the Duchess of Cornwall met with Organic Sea Harvest’s co-founders on Thursday 16 September.

The royal couple, whose formal titles in Scotland are the Duke and Duchess of Rothesay, were visiting various local businesses in Portree as part of a larger tour with Lord-Lieutenant, Mrs Joanie Whiteford. 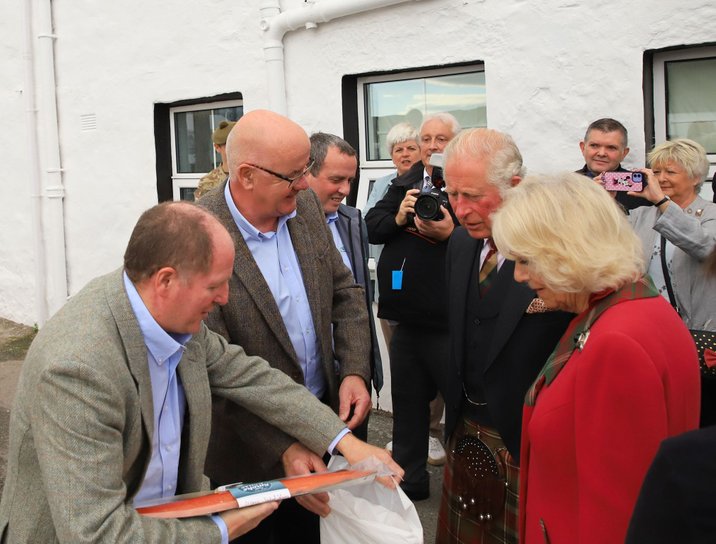 The Duke and Duchess were introduced to Organic Sea Harvest staff and three other local business-owners outside the Rosedale Hotel in Portree.  After the Duke had been given a dram of whisky and the royals had been treated to a Gaelic song from Mòd Gold Medallist, Robert Robertson, they met with Organic Sea Harvest’s co-founders, Alister Mackinnon and Alex MacInnes, and Chief Operating Officer, Robert Wyvill.

The royal visit came after a fillet from Organic Sea Harvest’s first-ever harvest was delivered to the Duke of Rothesay’s chef at Clarence House.  The Duke has long been an advocate of organic farming, previously owning a 1,000-acre plot of farmland for 35 years, a farm he transformed to become completely organic in 1985.  The visit coincided with the UK Soil Association’s Organic September 2021 event, an opportunity to raise awareness of the benefits of organic farming. 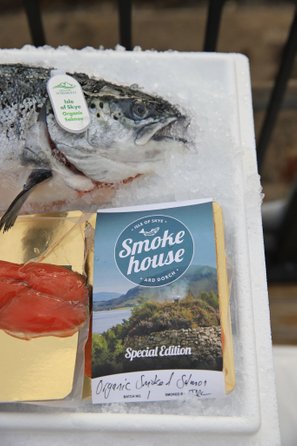 Commenting on the day, Alex said: “It was an honour to welcome the Duke and Duchess of Rothesay to Skye.  I was delighted to share with them our carefully-produced, organic salmon.  We are proud of our product and were thrilled to present it to the Duke, given his long-term devotion to organic farming methods.

“The Duke asked about our salmon farming methods, including our stocking density and how we handle sea lice.  It was a pleasure to talk to someone so knowledgeable and interested in our mission to create top-quality, organic salmon.  He was very positive and commented on our sustainability.”

Alister noted: “We were delighted to be one of four local businesses showing the royals our produce. The Duke is very energetic about organic farming and interested in local communities, so it was a delight to talk to him about our methods and share our product with him. He asked where we farmed and we told him he was welcome to visit anytime! I also explained to the Duke that our smoked salmon is best washed down with a nice Talisker – and he told me to finish his dram!  Unfortunately, I couldn’t as I was driving later!”

2) Further information on the Isle of Skye Smokehouse can be found on their website: https://www.skyesmokehouse.co.uk/.

3) Other businesses present along with Organic Sea Harvest included West Coast Organics, Isle of Skye Fudge Company and Island at the Edge.

4) Organic Sea Harvest was officially incorporated in August 2015 and currently operates two fish farm sites on the Skye coast, including Invertote and Culanacnoc.