Refusing the two Skye sites has resulted in a significant loss of jobs for companies based in Inverness and Dingwall. 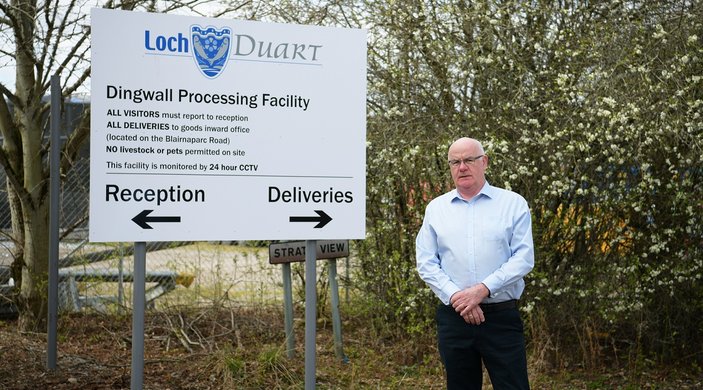 "Planning decisions come with great economic consequences that can be felt throughout the Highlands.  Many were not aware that refusing OSH planning would have such an effect on Gael Force or Loch Duart.”

The refusal of planning permission for a Balmacqueen site, which would have created nine jobs, has directly resulted in the loss of 20 jobs at Highland company, Gael Force Group. Gael Force founder, Stewart Graham, released an opinion piece on the Gael Force website, urging that the knock-on effects of such refusals be given greater consideration.

Gael Force Group had been due to supply equipment for the planned Balmacqueen farm.  The loss of this contract has directly resulted in over 20 people being made redundant.  Gael Force Founder, Stewart Graham, commented: “This is a shocking narrowness in consideration and a failure of process and joined up thinking.”

Loch Duart Managing Director, Mark Warrington, commented: “As others have stated, the economic impacts go beyond the job creation on the Isle of Skye.  In this case, Loch Duart feels that the decision to refuse the planned sites has repercussions that will also affect several support services throughout the Highlands and the wider country.

“The processing and packing work for Organic Sea Harvest would have created more jobs at Loch Duart, in addition to bolstering those of the 85 people currently employed in Dingwall.  It is crucial that full consideration is given to smaller-scale, specialised producers who fly the Highland and Islands flag around the world.  The Scottish Government’s own economic impact reports clearly underline the numerous jobs created across Scotland in supporting each fish farm development.”

Dingwall-based councillor and OSH co-founder, Alister MacKinnon, stepped down as Highland Council budget leader following the decision to refuse planning for the Balmacqueen site.  Councillor MacKinnon commented: “Planning decisions cannot be made lightly given their far-reaching effects.  They cannot be made with a blinkered outlook.  A council needs to consider the bigger picture across the whole Highlands and consider the effect their decision would have on other businesses.

“I believe there is a need for largely-unobtrusive fish farms to be one of Scotland's key rural industries living alongside and in harmony with the tourism sector.  The Highlands are currently in economic recovery.  Planning decisions come with great economic consequences that can be felt throughout the Highlands.  Many were not aware that refusing OSH planning would have such an effect on Gael Force or Loch Duart.”

OSH is dedicated to investing in a range of local organisations and businesses in the Highlands.  So far, the salmon farming initiative have invested over £13 million in the local economy.  Councillor MacKinnon continued: “I was born in Uig, and Staffin is extremely precious to both my family and OSH as a company.  The area is economically-fragile and, in keeping with the OSH ethos, we wanted to care for the local area, ensure our staff are well looked after and provide benefits to the local community.”

1) OSH’s Balmaqueen site would have directly created nine new jobs and had been recommended for approval by planning officers.  Approval was denied with eight votes to six.

2) OSH was officially incorporated in August 2015.  The first harvest for the market is expected in Spring 2021.  OSH is the only salmon farming company in Scotland to focus solely on producing the finest organic salmon, with both sea sites officially certified as organic by the UK Soil Association.

3) A report, the Estimation of the Wider Economic Impacts of the Aquaculture Sector in Scotland, published in September 2020 and undertaken by Biggar Economics on behalf of Marine Scotland and the Scottish Government, stated that in 2018, the aquaculture sector supported 11,700 jobs in the Scottish economy.  Therefore, it can be calculated that each job in Scottish aquaculture will indirectly create four other Scottish jobs.  https://www.gov.scot/news/wider-economic-impacts-of-aquaculture/.

4) Mr Graham’s opinion was published on the Gael Force website and can be read here: https://www.gaelforcegroup.com/news/2021/opinion-beginning-new-clearances.

6) Sutherland-based company, Loch Duart, purchased its own processing facility in Dingwall for the first time in its 21-year history.  The processing plant created 60 new jobs in the Dingwall area.  Loch Duart currently produce 6,000 tonnes of salmon from its farms in Sutherland and the Outer Hebrides.  The company employs 160 people.