The MP for Ross, Skye and Lochaber enjoyed his first-ever visit to an operational fish farm last week (Friday 2 July) and concluded there was “a bright future for aquaculture.”

Mr Blackford commented: “I was impressed with the whole thing. A company employing 18 people on a full-time basis is making an important contribution to the local economy. I think there is a bright future for aquaculture. I understand people have reservations and we have to embrace that but it’s clear there are community benefits – which we are seeing in the north-east of the island.” 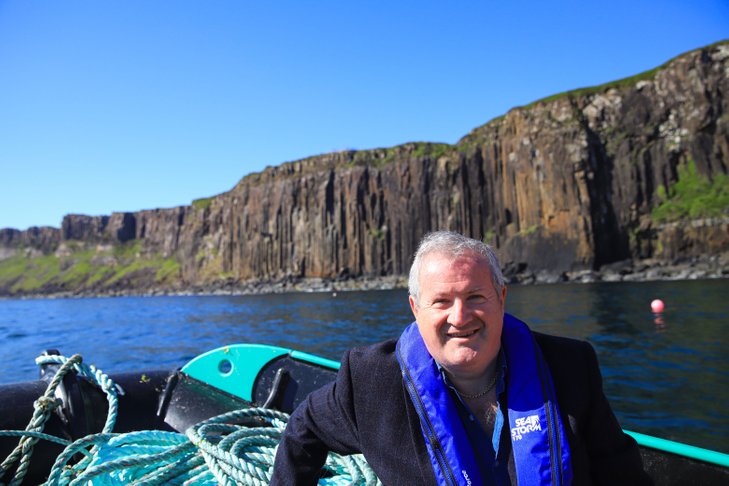 I think there is a bright future for aquaculture.  I understand people have reservations and we have to embrace that but it’s clear there are community benefits – which we are seeing in the north-east of the island.”

It is hoped that Organic Sea Harvest will be able to support further full-time jobs, if the appeal against planning refusal for their Balmaqueen site proves successful.  The fish farm would provide full-time employment for seven farm workers and two boat workers.  The site would also allow a secure, year-round supply of organic salmon, contributing to the post-Covid economic revival.

Mr Blackford commented: “I said previously that I was disappointed planning permission was not granted and I hope the appeal is successful.  It’s important for the local economy, supply chain jobs and investment in the local community.  We need to make sure the Highlands and Islands are a place where people can put down roots and earn a decent living.”

Objections had been raised regarding the visual impact a Balmaqueen site might have.  However, a recent letter to the WHFP editor from Organic Sea Harvest’s Founding Director, Alex MacInnes, noted that he had sought the opinions of numerous tourists at Rigg Viewpoint. The overwhelming conclusion was that visitors did not find the sites to be intrusive and the visual impact was minimal. A decision on the appeal will be made later in July.

Organic Sea Harvest is the only salmon farming company in Scotland to focus solely on producing the finest organic salmon, with both sites certified as organic by the UK Soil Association. The rigorous organic standards, such as reduced stocking density and a carefully-selected environment, result in healthy, organic fish.

The occasion marked the first time Mr Macdonnell had visited an Organic Sea Harvest site.  He remarked: “I was really pleased to visit.  It’s a really impressive operation.  It’s a great location, a great product and a great addition to the salmon industries.” 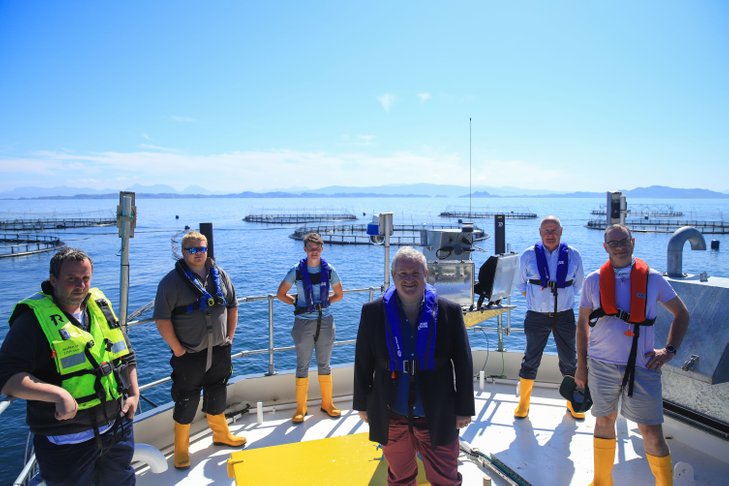 Commenting on the day, Organic Sea Harvest co-founder, Alister Mackinnon, stated: “We got to see Skye at its best and the trip to the site was breath-taking.  It was a great opportunity for Ian Blackford as our MP to see an operational site for the first time ever and to get an in-depth knowledge of how we are working to achieve our aim of becoming the world’s leading producer of organic salmon.”

2) A report, the Estimation of the Wider Economic Impacts of the Aquaculture Sector in Scotland, published in September 2020 and undertaken by Biggar Economics on behalf of Marine Scotland and the Scottish Government, stated that in 2018, the aquaculture sector supported 11,700 jobs in the Scottish economy. Therefore, it can be calculated that each job in Scottish aquaculture will indirectly create four other Scottish jobs.  https://www.gov.scot/news/wider-economic-impacts-of-aquaculture/.