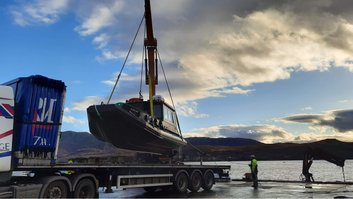 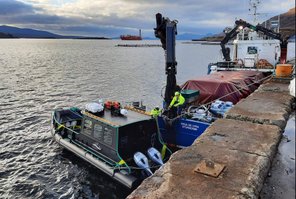 Organic Sea Harvest has welcomed a second personnel boat to the growing fleet this week, taking delivery of the brand new ‘Kilmaluag’.

Built by Arran Workboats, the 9 metre long vessel has been customised to suit the specific needs of Organic Sea Harvest. This follows the delivery of the first Arran personnel boat, the ‘Lealt’, earlier this year.

Calum Monteith, Director of Arran Workboats, says that the company were “delighted to be awarded the contract to build the two new workboats for Organic Sea Harvest.

“The range of boats offered by Arran Workboats have a reputation of being tough, rugged and built for a long life of hard work. The boats are fabricated from HDPE and all the hulls have design approval for a range of 6 to 9 metres.

“Safety at sea is paramount and each boat is equipped with Arran Workboats unique Man Overboard Recovery System.”

The ‘Kilmaluag’ was launched at Kishorn Port on Wednesday and is named after a crofting township and river just south of Culnacnoc on the Isle of Skye. She will undergo final preparations alongside Staffin slipway on Thursday before being introduced to site.

All the vessels in the Organic Sea Harvest fleet are named after local rivers or places, making the connection between land and sea.

With community at the heart of the company, Organic Sea Harvest were extremely pleased to award the build contract to an important island employer in Arran Workboats.

“It is multiple orders like these that secure employment for our build team who are all from the island population and trained in house added Calum.

“We have worked closely with the team at Organic Sea Harvest and built a good relationship with them and we look forward to working with them in the future.”